As the ageing population rises and fertility rates fall across Europe the continent faces an increasing labour force shortage, according to a recent analysis by GlobalData, a leading data and analytics company. Lower fertility rates across most European Union (EU) countries is causing a reduction the growth rates of the youth population while increased life expectancy is leading to a steady rise in the growth of the elderly population.

Ramnivas Mundada, Economic Research Analyst at GlobalData commented, “The populations of most European cities are currently undergoing significant demographic changes, which are projected to completely transform their economic and social landscape. We predict that between 2017 and 2025, 184 out of 263 metropolitan areas from the EU-28 will record a negative growth rate in their working age population.

‘‘Most of these cities belong to Germany, the United Kingdom, Spain, Poland, France and Romania. Riga (Latvia) and Galati (Romania) are both expected to register the sharpest declines in their working age population during this period with a compound annual growth rate (CAGR) of only 2.2% and 1.7% respectively.’’ 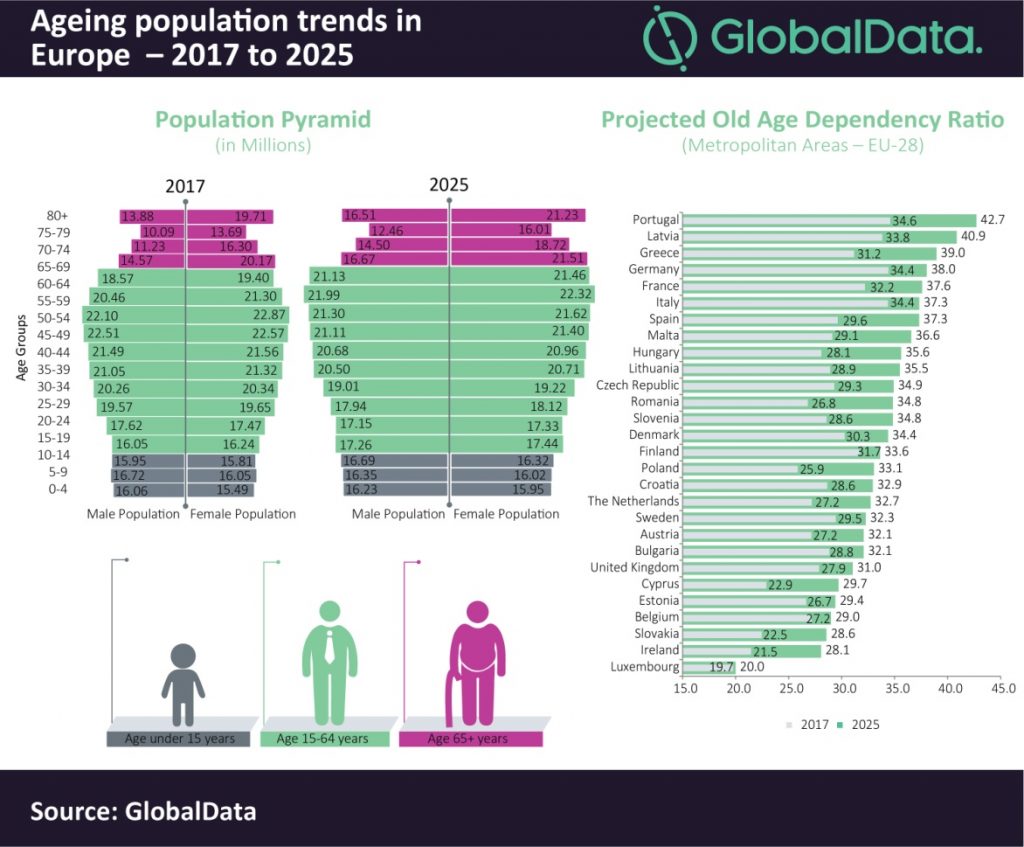 By 2025 more than one-fifth of the population in metropolitan cities from the EU-28 covered by the company’s analysis will be aged 65 years old and over. The old age dependency ratio, which measures the number of elderly people (population aged above 65), as a share of those of working age (population aged between 15 and 64),  is projected to increase from 31.2% in 2017 to 35.3% by 2025 across the EU-28 cities, due to the increase in life expectancy and a shrinking working age population. Between 2017 and 2025 Neubrandenburg (Germany) and Galati (Romania) are projected to register the maximum change in the old age dependency ratio of all EU-28 cities of 14.6% and 13.2% respectively.

Ramnivas added, ‘‘The changing nature of the age structure we are seeing here is expected to increase the burden on the income earning population and could have an adverse impact on the economic growth prospects of EU-28 cities.  Furthermore, it could also place pressure on public finances as healthcare expenditure and public pension provision costs rise.

‘‘Measures such as increasing the levels of post-retirement employment opportunities, offering more support for  women returning to the workplace and investing in youth employment, education and training could help to mitigate the impact of these demographic changes over the long term.’’

4,000 of the world’s largest companies, including over 70% of FTSE 100 and 60% of Fortune 100 companies, make timelier and better business decisions thanks to GlobalData’s unique data, expert analysis and innovative solutions, all in one platform. GlobalData’s mission is to help our clients decode the future to be more successful and innovative across a range of industries, including the healthcare, consumer, retail, financial, technology and professional services sectors.

As part of GlobalData macroeconomic offerings for cities, we provide comprehensive data on over 3,000 cities, including major metropolitan areas covering 150 countries. The database covers over 300 indicators for each city across five essential indicator themes – demographic, economic, employment, income, and expenditure data.

Long-term historical data is sourced from a number of national statistical and international institutions, with forecasts provided by our team of highly experienced economists.